skip to main | skip to sidebar

OK. Apparently, I need to start hanging out in the Eaton Centre more often. While I'm told the whole "flash mob" thing is totally passe, I still think they are totally cool.

The Mall Just Got Cooler

I love the mall. I love shopping. Anti-consumerism is totally not my thing. I shop when I'm bored.I wander the mall and around Yonge and Bloor just to browse a dozen times a month. While I see tons of great sales and merchandise, what I've never seen is a spontaneous dance in the epicentre of consumer culture: the Eaton Centre. You may remember my previous post where I said I'd love to be part of one of those spontaneous dances you see in movies all the time? Why, oh why, could I not have been in the mall when this happened! Totally would have made my day.

Should You Eat It?

I stumbled upon this from someone's link on Facebook. It was one of those random clicks that leads you somewhere you likely never would have ended up otherwise. This made me laugh out loud. Enjoy this handy guide: 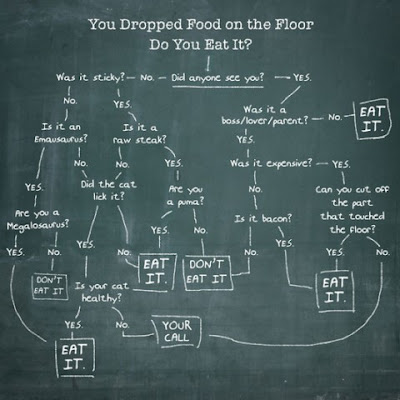 I was watching the American Idol auditions the other night and there was this girl who came in all dressed in 80s rocker chick gear. Short, edgy hair, dark makeup, chunky jewellry. She was going to sing Pat Benatar. I thought, oh boy... this is gonna suck. What a huge cliche.

BUT, when she sang, she was actually really good. So good in fact, that they gave her the much coveted "golden ticket."

I'll probably never watch the show again. I only like the auditions. But I was happy the 80s rocker is making it to round 2. Rock n' roll.
Posted by MM at 6:25 AM 1 comment:

The Smell of Vacation

Sometimes in the morning when I'm walking to work, I like to cut through this building on the corner. It's warm and there's a giant fountain in the middle. If I close my eyes for just a second as I'm walking, it smells like I'm in a hotel; the kind of hotel with a big indoor pool and it makes me think of vacation.
Posted by MM at 5:57 AM 1 comment:

Just wanted to say that one awesome thing, albeit a totally small and insignificant thing, is how easy it is to type 2010.

Just rolls of the fingers. Loving it. :)

Also, just a random question: At what point is it too late to be wishing people a happy new year? Is it the first time you've seen or talked to someone in the new year? Or is there a cut off? Like mid-month or something. Any thoughts on "happy new year" etiquette?
Posted by MM at 11:34 AM No comments:

My Dad was inquiring over the holidays how we would refer to this new decade. You just can't say "oh-ten," he said. "That sounds stupid." I told him it was being referred to as "twenty ten" and he seemed satisfied with that.

The end of the "oh-something" years has me thinking about how much has changed in the past decade. Allow me to sound like a 90 year old woman here for one second but I actually remember New Years Eve 1999 like it was yesterday. Laura and I had new boyfriends. We went to two parties. I funneled something from a cardboard party horn (there's a picture. It's epic). We drank Jungle Juice like silly teenagers and my Dad drove us to Tina's place around 12:30 where we ate muffins and acted like idiots till the wee hours of the morning. Tina rolled in the snow with no coat on. Laura and Scott had screaming contests and stair runs. I asked Laura what she thought would happen in "the year 2000" and she matter-of-factly said: "There's still gonna be snow on the ground." I thought it was the funniest thing ever. The world didn't explode. IT systems remained in tact. The hugely ominous Y2K came and went without too much disaster.

I can't even possibly begin to recount the major milestones of the past decade with any sort of brevity.

What I can say is that for the first time in those ten years, 2009 was the only year that I actually wrote down my year's goals on a piece of paper and for all you skeptics out there, it's true what they say. By writing them down, I accomplished every single one. I ran my first 10 km race, I got a new job, I completed 10 speeches in Toastmasters (insert giant nerd joke here) and got my certificate, among other things. While I'm still contemplating the goals for the year ahead, I think this will become a new practice for me. It's certainly satisfying to look back on a page of check marks at the end of it all.